Earlier this year, when signing an influx of new members here at The Cove Workspace, we came across a man with lively character and, as it turns out, a lively career background. Introducing Australian Wildlife Biologist and Filmmaker, Chadden Hunter. The BBC and National Geographic Filmmaker has an impressive CV, his more recent roles consisting of Producer/Director for Seven Worlds One Planet and Planet Earth 2, as well as Series Producer on Wild Arabia and Principal Director on Frozen Planet. Hunter has recently, however, returned to his roots and taken a new position as Executive Producer at Wildbear Entertainment.

In light of our focus on the Creative Industry for the month of March, we decided to ask him a few questions about his career in film thus far, and his advice for young aspiring filmmakers alike…

So, you didn’t realise you would go on to pursue film in the beginning did you? What influenced your decision to delve into the world of film making?
From a young age I had a passion for nature and wanted to share it with other people.  I followed an academic path thinking I’d become a biology professor in University.  But while I was living in the remote mountains of Ethiopia studying gelada baboons for my PhD a BBC film crew arrived to make a film about my monkeys and my research. National Geographic magazine followed and some more film crews, and with each one I learnt more about the art of story-telling as a way to reach and move people.  It was an epiphany for me to realise if I switched from academia for media I could share my love of nature with not just a classroom but with millions of people.

Did you have any key mentors, idols or icons that helped you navigate your career?
Obviously Sir David Attenborough’s been a huge influence on many of us who have ended up in wildlife filmmaking. I first met him at my field site in Ethiopia over 20 years ago when he came with a crew to film Life of Mammals. David’s incredibly humble and curious and wanted me to tell him all about the gelada baboons. It was a pinch-yourself moment to be teaching your childhood something. I’ve been lucky to mainly work of Attenborough TV series ever since.

Where has your career taken you, and would you have a favourite destination and/or experience?
I’m profoundly grateful that my job has taken me to so many exotic corners of the world. I’m a hot weather person and growing up in north Queensland I just love the tropics. There’s something about the abundance of life in a rainforest that I find exhilarating and magical. But the trips to Antarctica while filming Frozen Planet were probably the most memorable (and dangerous!). Scuba-diving underneath the Antarctic ice sheet and having whirls of emperor penguins come up from the depth to circle around me was rather special.

Do you have any advice for someone wanting to pursue the filmmaking industry?
If you asked everyone in wildlife filmmaking how they got to where they are, every one of us would have a different story.  The only common denominator is that none of us gave up.  It’s a career, like art or music, that relies on you living and breathing it as a passion before anyone will give you a job.  The good news is you don’t need any particular skills or education.  But you need to make hobbies of going out an observing nature or making and editing films on your phone.  It might take a few years and a few side jobs to get there but if it’s your passion and you don’t give up then I assure you’ll one day be in the world’s best career!

And, how has The Cove been for you since getting back up and running here in Brisbane?
The Cove has been heaven for me.  I’ve been on the road a lot and returning home to Australia after years of living overseas in swamps and ice-caves I’ve craved a cosy, quiet, yet friendly workspace.  It’s so comfy it actually feels more like a resort than any office I’ve worked in.  I also love the wonderful eclectic bunch of new friends I’m making!

Why Community Engagement is More Important Than Ever

In Conversation with Lachie Stuart, Building a Stronger Mindset

The Cove is a space to create, collaborate and connect your business with industry leaders, entrepreneurs and small businesses alike.
Copyright 2020 Cove Cowork. 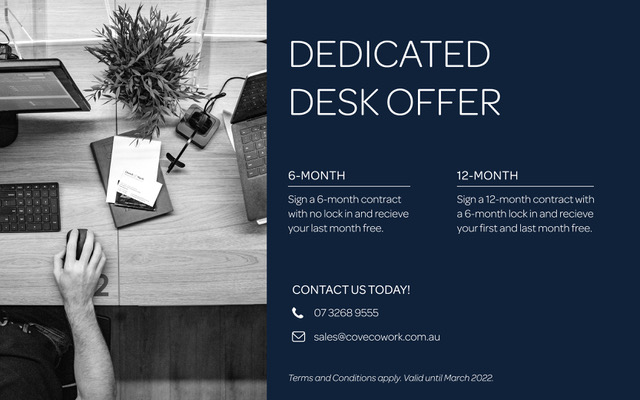